skip to main | skip to sidebar
Now there is a a laundry ball
that can clean clothes without detergent.
It is chemical free, and hypoallergenic.

Perfect for those who are concerned about irritation
or skin allergies caused by laundry detergents.
A real eco-friendly product!
Posted by Lisa 1 comment:

Some of the harmful ingredients in detergents:

These synthetic surfactants are commonly listed as 'anionic surfactants' on labels, and are one of the most common surfactants in use. During their production process, carcinogenic and reproductive toxins such as benzene are released into the environment. They also biodegrade slowly, making them a hazard in the environment.

These chemicals have been linked to cancer, lung damage, lung inflammation and damage to mucous membranes.

One common surfactant in U.S. laundry detergents is nonyl phenol ethoxylate (this chemical has been banned in Europe, and was found to slowly biodegrade into even more toxic compounds). Studies have found that this surfactant stimulates the growth of breast cancer cells and feminizes male fish

Phenol is toxic and people who are hypersensitive to it could experience death or serious side effects at very low exposures. Plus, it is rapidly absorbed and can cause toxicity throughout the entire body. Typically, death and severe toxicity result from phenol's effects on the central nervous system, heart, blood vessels, lungs and kidneys.

Many of these can be made from petroleum (see petroleum distillates above), and do not degrade in the environment. They've been linked to various toxic effects on fish and mammals, and often cause allergies and skin and eye irritation.

These chemicals are used to remove hard-water minerals to make detergents more effective, and to prevent dirt from settling back onto clothes during a wash. A major problem with them is that, when released into the environment, they stimulate the growth of certain marine plants, which contributes to unbalanced ecosystems. Many states have banned or restricted the use of phosphates for this reason, and you may see laundry detergents advertised as "low-phosphate" or "phosphate-free."

EDTA is a class of compounds used as an alternative to phosphates to reduce mineral hardness in water, prevent bleaching agents from becoming active before they're put in water and as a foaming stabilizer. EDTA does not biodegrade readily and can re-dissolve toxic heavy metals in the environment, allowing them to re-enter the food chain.

This is a chemical precursor to chlorine, which is highly toxic and involved in more household poisonings than any other chemical. When it reacts with organic materials in the environment, carcinogenic and toxic compounds are created than can cause reproductive, endocrine and immune system disorders. 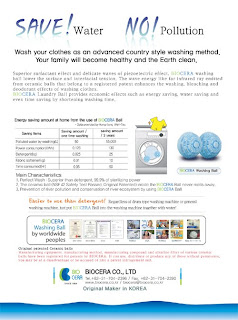 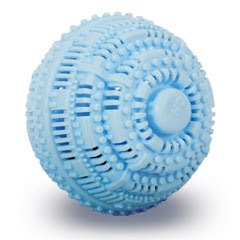 A revolutionary way to do your laundry. You can now have an allergen, chemical detergent free laundry, while saving money and
doing your part in protecting the environment!

It has been scientifically proven that this wash ball has better washing ability than detergent, and make water safer than tap water.
Posted by Lisa No comments:

This ball is a Nano Technology Ceramic Ball made in Korea. It has been developed, researched, and scientifically tested.
It contains ceramic beads and emits infrareds and negative ions into the water. Its antibacterial effect eliminate bacteria and odour and increase the cleaning effect of water.

This laundry ball can clean clothes without detergents
Posted by Lisa No comments: 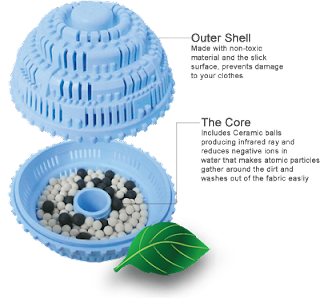 
1) Load dirty clothes with 1 Wash Ball in the washer (if load is less than 5kg)
use more than 1 wash ball if load is heavier than 5 kg.
2)Adjust your wash setting (Ball works well in warm water)
3)Do not use Ball in the Dryer.
4)For optimum performance, dry wash ball in sunlight once a month.
Posted by Lisa 1 comment: 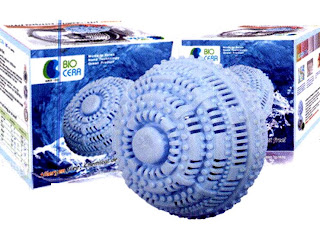 For product info or enquiry:
email to: saverwashball@gmail.com

(breakdown cost: only RM0.168 per wash!)
Free postage to anywhere in Malaysia. 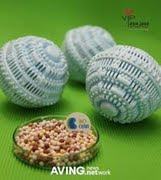 The Biocera ball has been chosen as the winner of Aving VIP Asia 2009 Award. Aving selection was based on the energy saving ability of a single product from the Asian market. Biocera has received a trophy for its achievement.